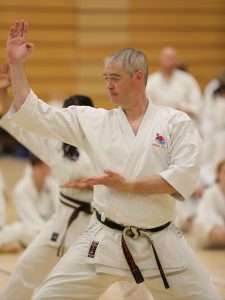 Having gained a large amount of instructing experience at Market Drayton and helping to train numerous students to gain their Shodans, Sensei Thomson attained his Nidan (2nd degree black belt) on 25 May 2002, once again at Deeside under the late Sensei Enoeda.

In June 2002, Sensei Thomson moved from Shropshire to Bedfordshire and trained with numerous clubs around the area from various Shotokan Organisations.

Sensei Thomson wanted to teach Shotokan to the high standards he has enjoyed from his own experience and so decided the best way to do accomplish that, would be to start his own dojo.

In September 2003, Sensei Thomson and his wife, Tracii founded a new dojo and respectfully named it after his home town club… Ataru SKC.

Sensei also trains in Traditional Jui-Jitsu and has previously trained in Aikido, Tae-Kwon-Do and Kickboxing. He integrates these teachings into aspects of Shotokan instruction but always keeping the Spirit and Style of Shotokan foremost.